If anything in American culture really and truly epitomizes the expression, Go Big or Go Home, it is The Snackadium. Sure, The Snackadium, or snack-filled stadium, is big in size. But the sheer determination that fuels the construction of a Snackadium is even bigger.

The motivation that drives Snackadium assembly runs deep. A Snackadium builder doesn’t just want to dip plain old snacks into plain old dip. No way. They want fresh California Avocado Guacamole in the shape of a football field and snacks that sit in bleachers like fans at a sporting event. They need grass made of cilantro. It wouldn’t be an overstatement to say that a Snackadium builder puts in just as much work before a big game as the athletes they celebrate. In fact, The Snackadium is an athletic event from conception to consumption.

First, the acquisition. The hoarding if you will, of supplies to build the Snackadium. And just as fatigue sets in from the hunt for an old, Styrofoam cooler lid and bubble wrap, the triumph of finding the perfect sized box keeps them going.

Then, there is the calling upon, the conjuring of, that crafty person who lives on a Pinterest board somewhere. The person who sees beyond the glare of all those straight edges and aluminum foil, and instead sees a vision of oval. A Snackadium architect has to find the glue gun. And be willing to potentially burn themselves with it. Once the arena is built, it’s time to set a stage of Big Game halftime spectacular. Preparing all of the snacks, or rather enough snacks, to fill the arena requires a special knowledge of the game. An instinct. Using classic California Avocado guacamole for the field is calculated. In the end, in the final victorious moments when party-goers behold and applaud the sheer spectacle of ostentation, before the first tortilla chip scars the field, a voice inside asks… Can we move it?

Because building it, filling it and eating it isn’t enough. Showing up at a friend’s house with a Snackadium is what’s next. The time has come for a more reasonably sized, somewhat portable Snackadium. Watch the video to see how it’s done and get the recipe for Classic California Avocado Guacamole of Snackadium Proportions here/below. 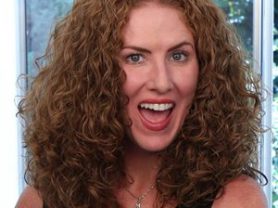 “Average people do amazing things every day. You don’t have to be Oprah or Ellen to make a difference in someone’s life. And sometimes the most important thing you can do for the people you love is feed them.” — Sara O’Donnell, Average Betty

Sara O’Donnell is a FoodBlogger, Video Producer, YouTube NextChef and the creator of Average Betty. Millions of views, thousands of subscribers and accolades from both new and traditional media, have made Average Betty a strategic partner for food commissions, national brands and multinational mass media corporations. Sara lives in Los Angeles with her husband Lee and their daughter, Maya. She is occasionally serious and always hungry.

Sara is a brand advocate. Their content on the California Avocado Commission website and/or blog is part of their partnership with our organization.