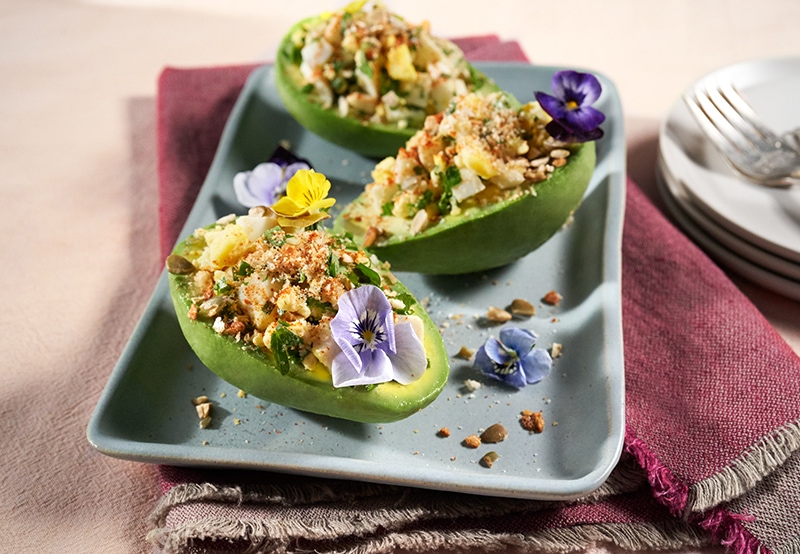 This recipe is a unique twist on a classic favorite; turning the famous avocado toast inside-out by serving the Fresh, California Avocado as the base and placing toasted breadcrumbs within. Enjoy this dish and it’s health benefits of an excellent source of dietary fiber (29% DV) and a good source of potassium (15% DV). Consuming foods rich in fiber may reduce the risk of heart disease, obesity, and type 2 diabetes. Additionally, a diet rich in potassium helps to offset some of the harmful effects that sodium has on blood pressure.

Serving Suggestion: Before serving, add a final squeeze of fresh lemon juice to brighten the recipe.

Beverage Pairing: To contrast the creamy texture, enjoy this recipe with a glass of freshly squeeze fruit juice.

Large avocados are recommended for this recipe. A large avocado averages about 8 ounces. If using smaller or larger size avocados adjust the quantity accordingly. Brad Cecchi is the Executive Chef and Partner of Canon, a fine-dining destination in East Sacramento offering unexpected dishes in an unpretentious setting. Since opening its doors eighteen months ago, Canon has earned several accolades, including a 4-star review from the Sacramento Bee and coverage in national outlets, such as Travel & Leisure and Sunset Magazine.

Previously, Cecchi was the Chef de Cuisine then Executive Chef at SolBar, the eight-time Michelin Star-winning restaurant set within Calistoga’s luxurious Solage Resort and Spa. During his tenure, Solbar earned a Michelin Star both in 2016 and 2017.

He credits the confidence it took to start his first restaurant, Canon, from his on-the-job training in Calistoga along with what he learned from the ambitious job of opening a 200-seat farm-to-table steakhouse and running room service for a 484 room hotel: the Urban Farmer within the Westin in downtown Cleveland. There, he served as Executive Chef and was responsible for $15 million in annual food and beverage sales.

Brad started his culinary career in his native Sacramento. He helped open Mulvaney\’s B&L, served as the chef de cuisine under Michael Tuohy, and then, Oliver Ridgeway at The Citizen Hotels’ Grange, and got his cooking chops through the Culinary Arts program at American River College and later at the Culinary Institute of America, Hyde Park. He’s excited to be back home, and to be part of Sacramento’s evolving culinary scene. He lives in East Sacramento with his wife Mackenzie, their 1-year-old daughter Wallis, and their two dogs Reggie & Freddie.